Providing the Most Precise Pinhole and Pitting Services to the Industry

While the first inspection run identified the features, it did not have the highest-resolution scanning grid to get an accurate sizing of such small pitting corrosion. The limitations on the depth sizing accuracy in the first report posed a challenge for the operator’s integrity analysis team. With the operator facing the alternative of an additional, expensive dig program, a new inspection solution was required to give a more accurate measurement of these pittings and pinholes.

The project team originally planned the inspection without it specifically configured to identify small diameter pittings and pinholes. They performed the inspection by utilizing what was the standard UM technology with a 3.0 mm (0.12 in) axial sampling rate. After receipt of the final inspection report, the operator began a rehabilitation campaign which included verification digs for over 51 features over a two-year period, to validate the accuracy of the ultrasonic metal loss inspection. The digs showed the successful identification of all features. Upon further review of the non-destructive examination (NDE) data, analysts identified many features outside of the performance specifications. Several of these features were under-called, the majority of which were below what was at the standard detection and sizing thresholds in the industry at the time. Due to its axial sampling rate, this older tool frequently failed to detect some small pittings within corrosion areas, did not hit the deepest point of the feature and as a result under-called them. Without the correct feature depth, the operator could not plan the appropriate remediation. To properly prioritize repairs and other actions, the operator needed to be confident of the feature sizing accuracy.

Following the initial dig verification program, NDT Global worked alongside the operator to create a new set of requirements focusing on the accurate sizing of pittings and pinholes. With this new information in hand, NDT Global proposed the use of the ultrasonic metal loss with pitting resolution technology. This service features an optimized sensor carrier design for smaller diameter corrosion detection and sizing.

The ultrasonic metal loss configuration is specified to detect 5 mm (0.20 in) diameter pinholes at ≥ 90% probability of detection (POD). The improved axial sampling rate produces an ultrasonic signal every 0.75 mm (0.03 in.) with a circumferential sensor spacing of 4 mm (0.16 in.). This combination provides a high-resolution grid that is unmatched in the industry and increases the likelihood of detecting the deepest point of a steep-sided pit or pinhole, while simultaneously reduces the risk of an under-call. The ultrasonic metal loss performance specification states a depth sizing accuracy of ±0.4 mm (±0.016 in) at 90% certainty. With its now standard ultrasonic metal loss service, NDT Global has increased its specs to 1.5 mm (0.06 in.) axial sampling.

By delivering the data and analysis within the agreed timeline, NDT Global enabled the operator to combat any threats to its pipeline’s integrity. As the operator received data and analysis on time, it forecasted an accurate rehabilitation campaign, comprised of 45 digs addressing over 100 identified features.

After comparing the NDE and ILI measurements, NDT Global found that 93% of the features reported by the ILI were accurate to the depths measured by the NDE. 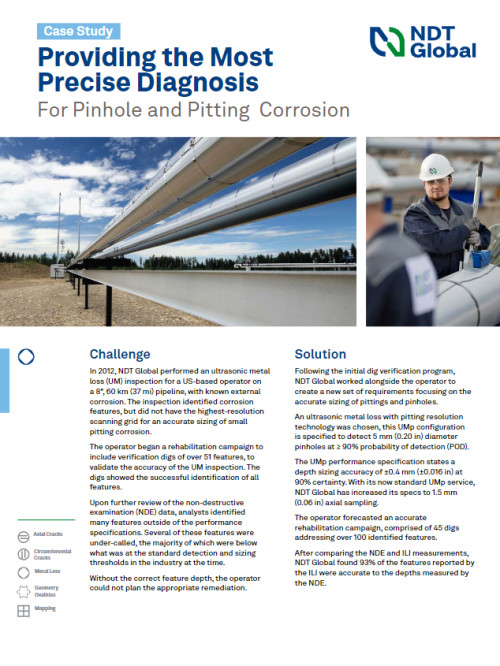